As our youngest Councillor William embodies energy and vitality coupled with maturity and realism. His youth means he is aware of the needs and aspirations of young people and is concerned to build a better future for everyone in Sandwell.

His realism means that he knows that a lot of people in Great Bridge are disillusioned and feel neglected and taken for granted by the present council administration. William has fresh ideas and a determination to reverse that feeling. His aim is to build a local community in which everyone has a stake and in which all can take pride.

Raised in Sandwell, William lives in Great Bridge so knows the area and its problems.

He was head boy at the Q3 Academy in Tipton. Already he has a record of community service having worked with Black Country Womens’ Aid and at the local food bank. His concern for humanity and opposition to injustice led to his involvement with the Holocaust Education Trust as part of the Belsen75 project.

TO KEEP IN TOUCH WITH WILLIAM: 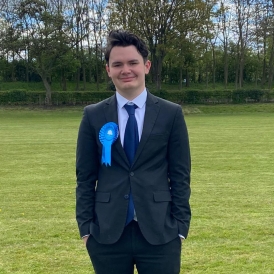