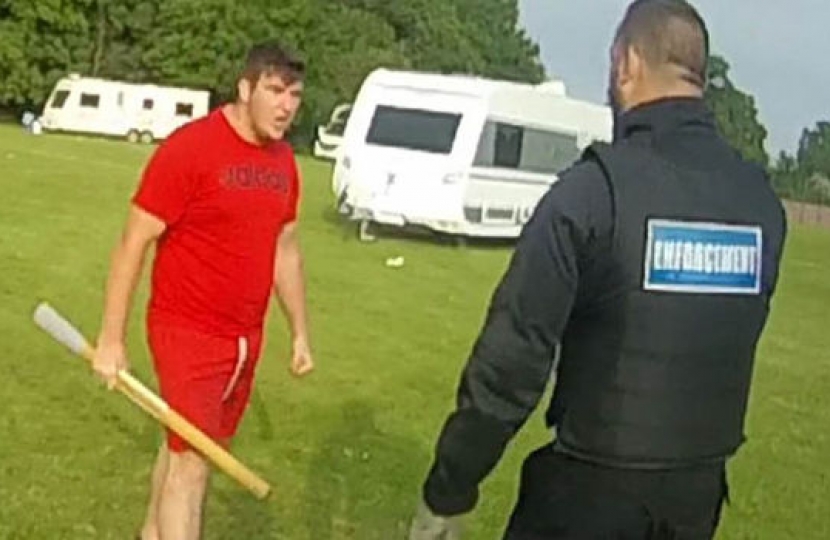 Cllr. Eling and cronies look set to plough on and approve a traveller’s transit camp at next week’s Sandwell Council Cabinet meeting.

The unlucky recipients of this facility will be the people of Smethwick. The land selected in Boulton Road previously had flats and maisonettes on it. They were demolished 15years ago and the land has lain derelict ever since.

Sandwell’s socialist council, rather than use the land to build homes for local families and reduce its waiting list, is spending an estimated £195,000 (with the council’s expertise in project management expect the actual cost to be twice that) to provide bases for 32 traveller caravans, plus washing and toilet facilities.

The plan is to charge travellers £80 per week per caravan to pitch up there and “each group” (whatever that means) will be required to pay a deposit of £250. There will, we are told, be “strict rules” on “littering and behaviour”.

The object of the exercise is to discourage unlawful encampments by providing itinerants with this alternative.

Common sense suggests it will not work. Of course, site users should be charged, rather than get a free ride on the backs of Sandwell council tax payers. But will travellers choose to pay rather take the free option of occupying any land they can get onto? Not renowned for displaying respect for private property, they usually have bolt cutters handy to get where they want.

Travellers are notorious for leaving behind scrap from their various "business activities", domestic  rubbish and filth. Many choose to travel precisely because it enables them to avoid the ordinary rules and restrictions placed on the settled population. It’s extremely doubtful they will submit to Cllr. Eling’s “strict rules”.

Eling’s project claims the support of the local police and the feeble Labour police and crime commissioner. Might this be a cover for their own inactivity? Often, the police in Sandwell have stood idly by while travellers have openly broken the law. They have neglected their duty of law enforcement and adopted the role of passive peace keeping appeaser.

Presumably health and safety dictates that the boys and girls in blue should not risk a traveller’s fist and so must avoid confrontation. A local senior police officer, straight from duty on planet Zog, spoke of the “need to accommodate members of the travelling community most of whom are well behaved law abiding citizens”.

A transit camp is under consideration because travellers are a serious nuisance in Sandwell. Anyone who denies the problem or minimises it, as Cllr Eling has done in the past, is either a fool or is attempting to con the people of Sandwell. Sandwell residents know the severity of the problem because they experience it first hand and not from an ivory tower with a telescope fixed to a blind eye.

The best way to do this to make Sandwell unwelcoming to travellers with speedy action against unauthorised encampments and strict enforcement of the criminal law.

The proposed transit site sends the wrong message and is unlikely to curb the nuisance that travellers present in Sandwell.