A CANDIDATE DESIGNATE FOR OLD WARLEY

Jeffrey’s professional background is in engineering and business management. He has spent 10 years delivering nationally significant infrastructure projects across the nuclear, utility and railway industries.

A young, local, family man and Warley resident, Jeffrey has a commitment to and concern for the Old Warley ward. He knows the issues there and is determined to champion the interests of its residents.

“A difficulty” says Jeffrey “is that, after years of Labour control, Sandwell council still fails to deliver value for money. Its councillors have become complacent, have lost touch with ordinary working people and, often, take residents for granted, making little effort to work on their behalf”

He thinks that the people of Old Warley deserve better. Forward looking and enthusiastic, but inspired by traditional Conservative values, Jeffrey aims to deliver that change.

Jeffrey believes strongly in community and in bringing everyone, regardless of background, together for the general good.

To Keep in Touch with Jeffrey

1n 2021 there will be two Conservative candidates in Old Warley, Jeffrey and Jay Anandou. 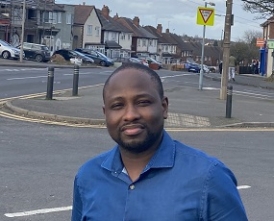