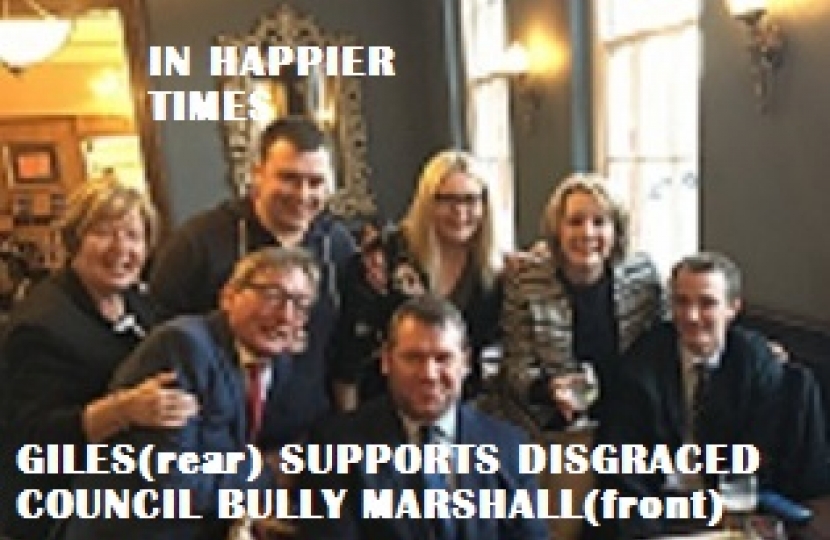 Don’t be surprised if Knights of Wednesbury, successor to Wednesbury Celebrates and entertainment arm of the Wednesbury North Labour party, advertises that Sandwell’s newest blues whinger is to perform at the Wednesbury town hall. This latest sensation “Mr. Snowflake” and his backing group the “Moaning Malcontents” are aiming at a national impact.

“Mr. Snowflake” is the stage persona of Wednesbury North councillor Luke Giles. After “long and hard thought” Giles has now publicly revealed that back in February he was bullied and harassed by Labour party officials and trade union officers. That revelation at this late stage has nothing to do with questions relating to his election expenses, though he did refer to this in his 11th September radio interview,… to deny any wrongdoing. The timing is purely coincidental.

The purpose of this alleged intimidation by members of his own party was to get Giles to vote for Yvonne Davies in the February council leadership election resulting from the suspension from the Labour party of previous leader Cllr. Steve Eling.

Despite his somewhat robust lumbering appearance, it seems that Giles has a more sensitive, even fragile side. So this solicitation of his vote seriously upset him. He consulted a doctor because he was not sleeping. There was pressure on his family life. He felt they had “got it in for me”. By his own description, he’s a wuss. Not fit for service in the trenches.

Curiously, he says that before he was approached he had not made up his mind who to vote for. Having been approached and, as he would have it, been bullied and harassed, he screwed his courage to a sticking place and “I said No”. He would not vote for Davies.

This defiance in the face of pressure seems at variance with the pathetic picture of his subsequent distress. Distress which he seems able to have put aside to accept the post of Chair of Scrutiny and an extra £8,750 p.a. in the Yvonne Davies administration. Or perhaps he was bullied into it.

It is also curious that, at first, Giles says he was undecided who to vote for. The Giles clan are firm Tom Watson supporters and dependents. Whatever faults she may have, Yvonne Davies can’t be all bad because she has a healthy distaste for Watson. She was certainly not Watson’s candidate.

It is standard practice for lobbying to take place in political leadership elections during which promises and threats, usually hinted at, are made. If Giles is unaware of this he’s even more stupid than he looks. If he buckles so easily under pressure, how is he able to champion the rights of his constituents? If he can’t stand the heat he should stay out of the kitchen.

According to Giles he has raised the issue by way of complaint to the Labour party; twice. He sent chasing e-mails and was told his complaint was in a queue. He says the regional director knew of his complaints and agreed with Giles.

The Labour party tells a different story. They say “This is the first we have heard of these allegations” “No complaint has been submitted to the party”. In view of the party denial of any complaint from Giles, it’s reasonable to expect him to disclose the e-mail traffic between them.

Now he has the backing of the “Moaning Malcontents”.  A third of Sandwell’s Labour councillors have sent a letter to Labour HQ asking for an investigation into Giles’ allegations. The first signatory is Cllr. Costigan though clearly she did not draft the letter. It’s in reasonable English and does not include her favourite phrase “Oh my God”. The other signatories are in the most part, like Costigan, sacked members of the previous Eling/Trow cabinet and include Watson employee, Hackett and former Watson employee and council bore P.Moore, and Zorro Hughes is there in the mix. All losers of £8,750 p.a. by virtue of their ejection from the council inner sanctum. They are joined by Giles’s mum and sister (two of the most useless councillors in Sandwell) and a few hangers on.

Perhaps, unsurprisingly they have the support of Tom Watson, who has his own issues with the Labour party.

Sometimes, a complaint is a smokescreen to divert attention; the back stabber who protests at being splattered with blood. Or the complainant may have an underhand motive and the complaint is used as a weapon to discredit. Sometimes a gullible idiot seeking fifteen minutes of fame is used by others to their ends. It can be genuine. Take your pick.

What is clear, again, is that the Labour party in Sandwell is at war with itself. It has abandoned any pretence of public service in favour of feuding.