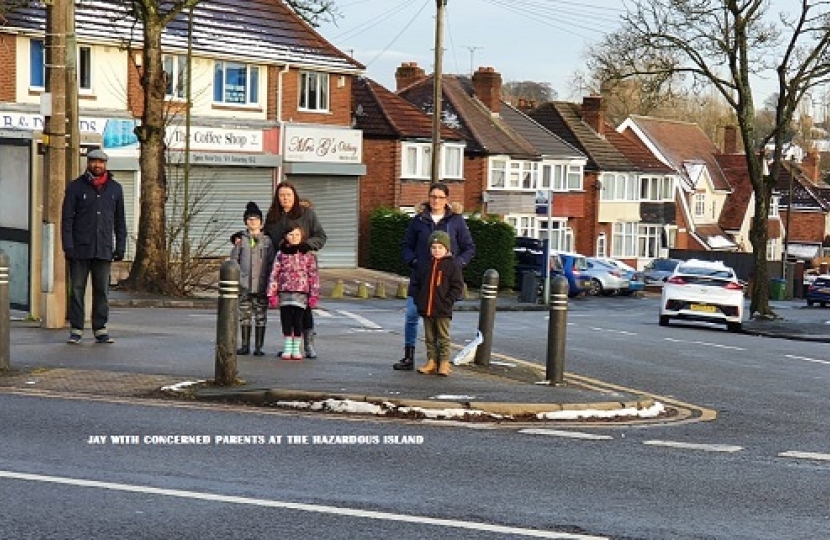 At present the island is used as a point to cross those roads but there is no designated pedestrian crossing. There are numerous shops nearby and the island lies on the main route into a large residential area. At school opening and closing times the area is congested with children, their parents and carers and the roads are busy with traffic and parked vehicles. This creates a hazard for pedestrians, particularly children, crossing at this junction..

The petition which was submitted to Sandwell Council deputy leader Maria Crompton on 11th January, calls for the provision of  traffic light controlled pedestrian crossings to improve the safety of pedestrians crossing Bleakhouse Road and Holly Road..

“This is not something unknown to the council. A neighbourhood plan for Old Warley’ published by Sandwell Council in 2012 identified this area as a potential hazard but no action has been taken for close to a decade. The residents are fed up with inaction and we want Sandwell Council to take immediate action on this petition. It is just a matter of time before someone gets seriously hurt.”

Mr Anandou who is also a Conservative candidate for Old Warley at the 2021 local elections, added:

“As a mother, I have always felt unsafe walking my children in that area, so I started the petition. On sharing the petition, it became obvious my concerns were shared by fellow residents, including our local campaigner Jay Anandou. He has helped us highlight this issue resulting in an overwhelming response and many more signatures have been added by fellow Old Warley residents. It is high time Sandwell Council acted to sort out this dangerous crossing before something terrible happens’’

A recent statistic reports an average of 1 death and 14 seriously injured pedestrians per day in the UK. Unsurprisingly pedestrians are more likely to be killed or seriously injured while crossing roads. Over half of the injuries were reported in circumstances where the casualty was crossing a road away from pedestrian crossings, The same report identifies child pedestrians as particularly at risk on journeys to and from school.