BOYS IN BLUE HAVE RED FACES 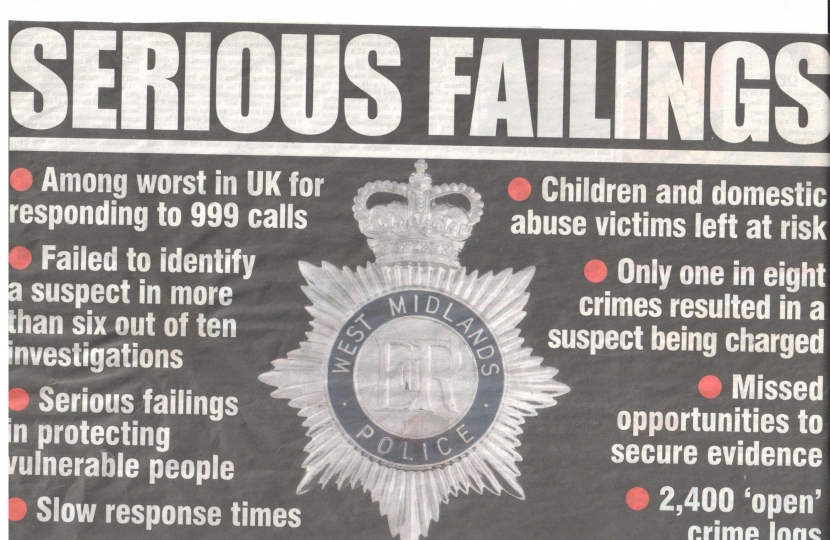 Recently, West Midlands Police force has consistently had a bad press. Its failings in so many areas have been chronicled and catalogued in local newspapers and there is some evidence that a rise in offending is a result of the force’s ineffectiveness in investigating crimes and catching offenders.

In what appears to be a concerted effort to draw the sting of those criticisms the Chief Constable and its Police and Crime Commissioner, David Jamieson have both been lamenting to the BBC a lack of resources and the need to prioritise functions. According to them “burglary and petty violence have become difficult to deal with”. They accepted that police officers are unlikely to attend following domestic burglaries or on reports of minor assaults.  These are failings much resented and rightly complained of by the public.

The chief constable’s apology for the service along with his admission that the force no longer investigates every crime will cut little ice. Jamieson pathetically blamed “warm weather” for an increase in violent crime and described “homicide at bursting point”. Might a major cause of these increases be the prevalence of drug dealing gangs and drug misuse rather than anything meteorological?  And how is this compatible with Jamieson’s own campaign for drug law liberalisation?

What caused an initial chuckle in local Conservative circles quickly followed by disbelief, was the suggestion by these gents that dealing with serious crime was a priority. Here’s an example of WMP ignoring folk having their homes burgled and dealing instead with the very serious non crime of Eling baiting.

On 3rd May 2018, the day of the local council elections, a Conservative candidate was visited at home by two officers from West Midlands Police force following a complaint by Sandwell council Labour leader Steve Eling.

Indeed Eling, himself had written to the candidate;  “I have been provided with a copy of a leaflet you are distributing that makes a statement about me. Please be advised that the statement contains allegations that are the subject of an investigation by the police and Crown prosecution Service into the criminal action and resulting harassment of the publication of those allegations. Consequently, the relevant section of your leaflet has been referred to the police to be considered as part of their investigation.

I give you notice now that should it be brought to my attention that you are continuing to distribute this leaflet or making this allegations in any other format, I will consider you to be a perpetrator and accessory to the crime and will make further referrals to the police as such” [Emphasis added]

Bully your own Labour councillors as much as you wish, Eling. Don’t try it on with Sandwell Conservatives. Except in your deluded mind, criticism of you is not a criminal offence

The officers themselves were clearly uncomfortable, quick to point out that the candidate had done “nothing wrong” and wished him well.

With no offence committed, what they were doing there and on whose direction?

While it’s always good to see a police officer, and we see too few on the streets, a courtesy call of this nature seems excessive and wasteful of resources.

It’s reassuring to be visited by police officers to be informed that one hasn’t committed a crime but might they be better employed catching criminals?

Perhaps as a result of his holiday in Thailand, where it’s a serious crime to venture any criticism of the monarch, Steve, who sees himself as the Sultan of Sandwell, is getting more than a bit above himself. We had not thought it an important function of WMP to pander to his ego nor to involve itself in party politics. Doing so is certainly not prioritising dealing with serious crime.

The advice we offer Chief Constable and Commissioner is to concentrate on core functions and ditch the public relations gimmicks. There never appears to be any shortage of police officers for photo opportunities. You’ll never know how far your resources will stretch until properly utilised. This means not hoarding £millions in reserves nor spending £ millions on your headquarters. You have done both.

More seriously, Chief Constable we think you ought to find out who on your force is attempting to interfere with democracy in Sandwell on behalf of Cllr. Eling.